The exhibition “5PM Managua, Nicaragua” will be on show at the CEDLA (Keizersgracht 397, Amsterdam) from May 16th – July 1st, 2012. You are all very welcome to come to its opening on Tuesday May 22nd from 17.00 onwards! We will be serving drinks & hold an Eat for Art! The expo’s curator Julienne Weegels will give a tour and explanation of the exhibition, and the idea behind LLECA+CAE’s Center for Experimental Arts.

Eat for Art? What’s that…?
LLECA organizes Eat for Art’s to help fund the CAE (Center for Experimental Arts) in Nicaragua. €5,- for a dish of great food. On the opening of 5PM Managua, Nicaragua you will be able to help yourself to a Mexican-style buffet! Entree to the opening = free, and eating = voluntary, so feel free to just drop by too!

INTRO TO EXPO
Young photographers Andrea Icaza, Alejandro Marín, and Oscar Duarte are part of an active and upcoming generation seeking visibility and expression of the environments they inhabit. Often combining photography with poetry – unifying image and word – they form an upcoming photography movement hungry for opportunities, and critical of their urban context. The exhibition is hosted in collaboration with the Dutch International Photography BienalGRID2012, and CEDLA Centre for Latin American Research and Documentation Amsterdam. 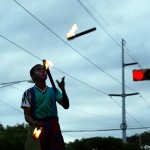 Semáforo/Stop!
Andrea Icaza (1994)
When the traffic light turns red, street vendor’s showcase their merchandize and talents. Icaza pictures the commercial activity and those who work the ever-changing urban reality of Nicaragua’s capital city Managua at its traffic lights.
—
S/T or Sin Título (Untitled) 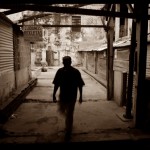 Alejandro Marín (1989)
Marín’s S/T touches various political and social aspects of the lives of those who use and inhabit the city’s streets, and in doing so tries to capture the essence of the city itself. Using various photographic and post-photographic techniques he modulates between image and reality. Alejandro Marín will be visiting the exposition at the end of June – more information on an activity we will be organizing that time will be available at the opening. 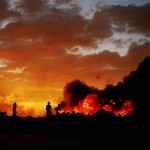 Night of Rites & Chureca/Flipside
Oscar Duarte (1987)
Oscar’s Night of Rites captures the creatures that appear together with alcohol on the cultural happenings of traditional festivities, merging into Chureca/Flipside where between flames and smoke we see those that inhabit one of the world’s largest open city dumpsters: Managua’s Chureca.